One of the more unusual requests I had while conducting interviews in Arica, Chile was for the tables to be turned and for me to become the interviewee. I had been to talk with Sergio Vasquez Ochoa to record his memories of the Junta de Adelanto de Arica, a board of development which ran 1958-1976. Alongside his job, Don Sergio also writes for various local media outlets and, as few Europeans decide to go and live in Arica to study its history, he thought my story was worth sharing. So we put another date in our diaries and I returned to his house to give him a turn at being the interviewer.

The article can be found here.

Having arrived back from a fantastic year of fieldwork in August I am now in the stages of writing-up my thesis and speaking at various conferences.

The first one I went to was within a week of returning from fieldwork (not advisable!) and it was a big one, The Royal Geographical Society Annual Conference, 26-29th August. I presented at two sessions, one was the Historical Geography Postgraduate Session and the other was with the Postgraduate Forum. The first was to the title “Through the eyes of the General: John J. Pershing and the Arica-Tacna Plebiscite 1925-1926” in which i spoke about the fascinating personal diaries of General Pershing which I found at the Library of Congress, Washington DC. It has been a really enjoyable part of my research and questions from the audience suggested that other people found it interesting too.

The second was to the title “Both here and there: Navigating a PhD between two universities” in which I spoke about my experiences of fieldwork where I ended up being based at the Universidad de Tarapacá in Chile and the results of that from language issues to differences in working styles and university cultures along with the enormous benefits it gave both me and my work.

Although it was quite stressful, coming back to the UK after a year on fieldwork and immediately presenting at the RGS, it forced me to keep up the momentum of work and I made some useful contacts with the Developing Areas Research Group for whom I am now a committee member and the twitter I recently set up can be found here.

A more recent conference I spoke at was the Warwick Graduate Conference in Political Geography, 27-28th November 2014, where I spoke to the title “Friends and Enemies on the Chile-Peru Border: The Almost-War of the 1970s”. Rachael Squire from Royal Holloway wrote some great reflections on the conference here. I met Rachael for the first time at the conference and we decided to co-convene a session at the 2015 RGS annual conference on maritime geopolitics with the title ‘Under the Sea: Geographies of the Deep’ so keep an eye out for a call for papers coming shortly if you think you might be interested.

So all in all, it has been a busy but productive few months since returning from fieldwork with plenty more writing and conferences to come in the new year!

After a great trip to the archives in the United States I flew down to Santiago, Chile to begin the next stage of my fieldwork. I began with a Spanish language course (or more specifically, Chilean…) to make sure I would be prepared for my research here and then visited some archives in Santiago, namely the Archivo Nacional, the Biblioteca Nacional, the Instituto Nacional de Estadisticas and the Banco Central.

My aim here was to investigate how the Chilean state has (or has not) involved it’s northern-most city, Arica, into national governance such as through economic policies and integration schemes. There were various obstacles in my way such as the tendency to take 2 hour lunches, multiple national holidays, and strikes which made accessing documents impossible at times. I’m hoping to visit Santiago in the new year however when my forthcoming research can lead me to more specific documents. 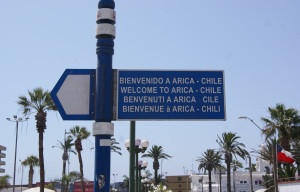 On the 12th November I finally flew up to Arica, to be based at my site of research. It’s great to be here at last and to experience the city which I’ve been reading and hearing about for so long. I’ve been generously welcomed into the Department of History and Geography at the Universidad de Tarapacá  where I’m surrounded by academics who work on fascinating issues surrounding  border contestation, indigeneity, and cultural identity so I couldn’t be better placed for my research. I’m currently settling into the department and reviewing the data I have collected so far, I collected about 3000 images from the US archives so sifting through them all (and deciphering some of the handwriting…) takes quite some time! My future plans are to visit the local archives here which will be much more specific to my work than what I was viewing in Santiago and then to get stuck into my ethnographic work, interviewing Ariqueños about their city and border experiences.

I was also fortunate enough to attend the VIII Congreso Chileno de Antropologia, the theme for which was ‘Fronteras y Antropologia: Sujetos, Contextos, Procesos’. I went to some fascinating sessions on themes such as ‘Museums as disputed spaces’ and ‘new socio-natural frontiers in ecological disputes’ as well as discussions about the concepts of ‘landscape’ and theorising the multiplicites of gender(s) and sexualities all which are in  infancy here in Chilean academia. It was a great opportunity to meet Chilean academics and to see how certain theories are framed in relation to in the UK. 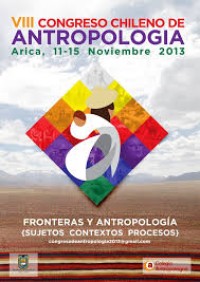 For the past month I’ve been scouring the archives of the Library of Congress here in Washington, DC and the National Archives in Maryland.

It has been a really productive few weeks looking at primary sources mainly from the 1920s when the United States government attempted to arbitrate Peru and Chile’s long-running border dispute. Since Chile’s northern territorial expansion during the War of the Pacific (1879-1883), the two countries had been in fierce disagreement about the rightful ownership of the Tacna and Arica provinces. Peru and Chile had agreed in the Treaty of Ancón in 1883 that the residents of these provinces would partake in a plebiscite within ten years to decide sovereignty once and for all. Chile failed to hold the plebiscite within the timeframe and in 1922 asked the United States to aid them in the completion of a fair vote.

And so, in 1925, a group of US citizens, headed by General John J. Pershing, traveled down to Arica to determine whether the conditions in the region were stable enough to hold a ‘fair and free plebiscite’. I have been studying the official correspondence of this US Plebiscitary Commission as well as the diaries of Pershing and his secretary Major Quekemeyer which illuminate the experiences of the Americans in Arica over their 10 months there and the micropolitics which affected major diplomatic decisions.

Unfortunately the Commission deemed the completion of the plebiscite to be ‘impossible and impractical’, mainly due to violent and inhumane treatment of Peruvians in the disputed provinces by Chilean citizens and officials. The oppression, deportation and even murder of Peruvians meant that there was no way that the result of any vote would take the sentiments of Peruvians into account. The US Commissioners (now headed by William Lassiter who replaced Pershing due to illness) were therefore forced to return to the United States in 1926, their aim uncompleted.

Reading the details of why this hopeful mission failed has been fascinating and the intersection between international politics and the very human level of the individuals involved has been more interesting than I could have hoped for. Luckily Peru and Chile were able to resolve the border dispute in 1929 but that’s the subject of another blog post…

I am now coming to the end of my archival research here in the US and will shortly be moving on to Chile for 11 months to conduct further archival research but also ethnographic research in Arica. So lots more border stories to come!

Arica is Chile’s northernmost city, located just 18km south of the border with Peru. It’s on the edge of the Atacama Desert- the driest desert in the world- but snow melt from the Andes manages to keep the valleys fertile.There’s even a National Geographic documentary about Arica’s aridity which you can watch for free here.

Chile appropriated this territory from Peru during the War of the Pacific (1879-1883) and has kept a firm grip on it (along with all the valuable nitrates it holds) with the border being officially demarcated by the United States in 1929 with the Treaty of Lima. This 1929 line in the sand will be the first border story I’ll be studying!